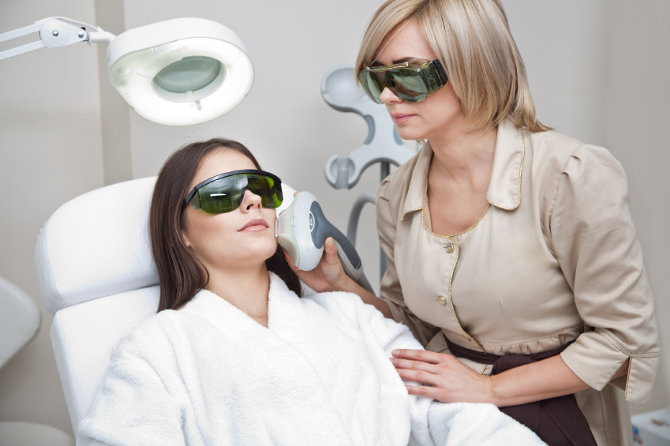 Today’s post continues a topic I started a few weeks ago – different kinds of light treatments used in a professional setting.

Today’s article is a brief look at laser skin resurfacing, a much more aggressive kind of treatment.

If you’re interested in having IPL or laser done on yourself, I recommend you read IPL vs Lasers. That article explains what light does to your skin and how the two differ.

What Is Skin Resurfacing?

Removal of skin may sound scary. But don’t picture a face with its skin burned off! There are different degrees of it. Also, skin resurfacing doesn’t have to be over the entire face. It can be restricted to a small area or a single spot on the face.

What does resurfacing accomplish? It can treat a range of problems:

Basically, getting rid of the skin removes the source of many of these issues.

But besides removing skin you may not want, the heat from laser light also induces the body’s natural wound response. During the wound healing process, new skin is formed. So artificially creating a “wound” in skin is how we get skin to look fresher and thicker.

The heat from the light also destroys color targets, such as melanin (pigment) and hemoglobin (the protein in blood that gives it the red color). This kind of targeting allows laser light to treat pigmented areas and vascular (blood-related) conditions, such as spider veins or varicose veins.

When it comes to laser skin resurfacing, you will come across the term ablative and non-ablative.

ABLATIVE means the outer layers of skin are destroyed (removed).

This happens when the laser heats the water in the skin to a boiling point, which vaporizes the skin cells. This method of destroying skin is known as a controlled burn.

As you might imagine, the skin has a strong response to a controlled burn. If it’s deep, the skin becomes red, weepy, and raw. Healing takes time (known as downtime or recovery period), and there are side effects, such as redness, peeling, flaking, and tender skin.

But the end result is new skin! Collagen is re-deposited as a result of the body’s wound healing process, and new skin forms. The dermis becomes thicker.

These most common ablative lasers are:

NON-ABLATIVE means no skin is removed. The epidermis (outermost layer of skin) is left intact.

The light energy only targets and affects the deeper layers of skin. The light heats the water in the skin, but rather than vaporizing the skin cells, it causes the coagulation of blood vessels. This in turn leads to skin peeling off through the natural shedding process (desquamation).

The following kinds of light treatments are considered non-ablative:

Fractional means only part of the surface of the skin is ablated (removed) by a laser. The laser beam is “fractionated” into a pattern where some parts of the skin are destroyed, and the other parts are left intact.

A pattern could be a grid-like one shown in the picture here. The red dots are where the skin has been ablated. The non-red portions are intact skin.

When part of the skin is left alone (intact), the healing time for the total treated area is faster, and there are fewer complications. This makes fractionated lasers more appealing than non-fractionated lasers.

Today, other lasers (called by different names) can accomplish the same things as a Fraxel laser. For example, the Er:YAG laser can be fitted with a pixelated tip, which can perform fractional resurfacing.

Below is a list of some common lasers, from the shortest to longest wavelength.

In the Visible Light Spectrum:

In the Infrared Spectrum:

What Do These Lasers Treat?

Most commonly for hair removal.

Most commonly for hair removal.

The traditional CO2 used to be the most popular laser but is rarely used anymore. The traditional CO2 laser is extremely aggressive (ablating down to the upper reticular dermis) and requires a long recovery time. It also presents high risks of scarring and hyperpigmentation.

The fractionated CO2 laser is the CO2 laser most often used today. Its uses include treating fine lines, wrinkles, acne scarring, and texture.

This was a super quick review of laser resurfacing. A lot more can be written about laser treatments, but I hope this gives you just enough to understand what a laser can accomplish and what questions you need to be asking.

Lasers are half science and half art. In other words, treating a patient’s specific problem can be done in multiple ways. Doctors have different approaches and different favorite lasers they like to work with.

Laser machines are also very expensive. A doctor will be limited by his machine(s) and therefore recommend treatment protocols based on what those machines are capable of.

There are many manufacturers of lasers, and these machines can do a variety of things – sometimes they’re as simple as one laser. But more often, a machine offers more than one laser and other modalities, such as IPL and RF (radio frequency). And with each laser, there are different tips that can be swapped around.

If you’re interested in getting a laser treatment, get a consultation with a physician or medical spa, which can give you much more information about their capabilities. Also, machines are always being updated with new features or improved technology.

As I mentioned before in previous articles, make sure you pick a physician who already has a lot of experience performing laser treatments. While a laser technician or nurse may be the one actually operating the laser on you, it is the physician who should be assessing your skin and determining the laser protocol, such as the specific laser, settings (crucial), number of treatments, and treatment period duration.

A physician who has seen a wide variety of cases will know pitfalls to avoid and what to watch out for in order to achieve a successful outcome. If he or she has already seen someone like you (with similar skin and similar problems), she doesn’t have to experiment with different protocols, which will ultimately save you time and give you better results.